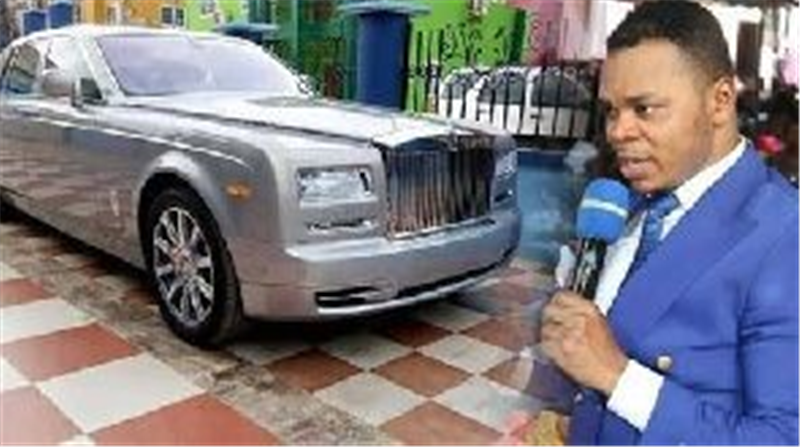 Leader and founder of The International God’s Way Church, Angel Daniel Obinim says Ghana is a ‘foolish’ country because no country that has sense will charge an import duty of 5 billion cedis for a car, MyNewsGh.com can report.

Obinim, who bought his Rolls Royce for 300,000 dollars said he was charged a duty of 5 billion cedis.

MyNewsGH.com could not readily verify whether the amount was 500,000 Ghana cedis, which he converted to the old cedis. What we can report is that he kept mentioning ‘5 billion, 5 billion’ as the duty he paid at the port to clear his car.

If the amount is 500,000 cedis, as we are guessing, it would mean that Obinim paid a duty of over 120,000 dollars to the state, which he says is rather outrageous.

According to Angel Obinim, everything in the country is rising in cost and it beats his imagination that he had to be charged 5 billion (old cedis) to pay port officials as duty for his Rolls Royce. He would have been required to pay less in Togo.

Obinim expressed sadness about being a citizen of Ghana and said he would relocate to another country but for his Church members who he loves dearly.

Earlier, a group of importers had publicly expressed their displeasure over the rising cost of duty at the ports which is taking a toll on their businesses.

Also, the President of the Chartered Institute of Logistics and Transport, CILT-Ghana, Mr. Ebo Hammond urged government to consider reviewing the high import taxes being imposed at the ports as means of revenue generation and rather focus on internally generating revenue.

According to him although efforts including paperless operations at the port, removal of all physical unauthorized road barriers are helping the country to generate revenue, too much emphasis on port charges will not help improve the country’s global logistic challenges and offer smooth trade and boost logistic index.

Also, Dr. James K. Obeng, the President of the Ghana Union of Traders Association (GUTA), said the introduction of the Common External Tariffs (CET) was affecting their business operations and they were likely to go out of business.

Dr. Obeng said import and export duties had doubled due to the CET, making importation difficult.