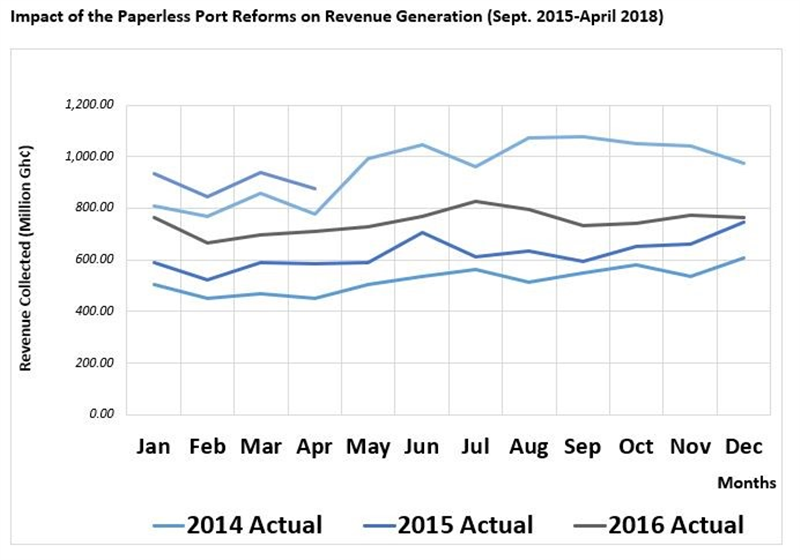 The recent review of the paperless port reforms, that has seen the reduction of the number of agencies undertaking joint inspections at the ports from 16 to three (3), is expected to lead to a 30 percent growth in government revenue from the ports by the end of the year.

The abolishing of the compliance stage of the clearance process— whose function has been taken over by the Customs Technical Services Bureau (CTSB)–also portends a much more perfected process that is able to rake in more revenue for central government.

Generally, revenue has underperformed, given the rafts of taxes abolished in the 2017 budget. The 11 tax measures announced has denied government of about a billion cedis in revenue. However, the paperless port reforms remains a bright spot in the generation of revenue.

The implementation of the paperless reform in September 2015, has led to a significant growth in government revenue, blocked leakages, and led to a reduction in the number of hours it takes to clear goods at the country’s ports.

From recording a revenue of GH₵6.265bn in 2014, the Ghana Revenue Authority’s (GRA) recorded a 19.5 percent increase in revenue in December—four months after the paperless port reforms began.

With large stakeholder buy-in and acceptance of the paperless reforms, revenue increased by 27.6 percent over the 2016 figure to reach GH₵11.435bn as at end of the 2017 financial year.

With the near-perfection of the integrated systems of the two existing platforms championing the delivery of ICT needs of the single window—The Ghana Community Network (GCNET) and WestBlue Consulting (Dubai Customs), turnaround time continues to improve at the countries ports.

“We have lived this tortuous process of re-alignment of these two platforms to the point of near perfection. Integration issues, observance of mutual ICT protocols and a few others which used to be the friction point between these two have been resolved, thus ensuring a less bumpy ride,” President of Ghana Institute of Freight Forwarders, Kwabena Ofosu Appiah.

The Ghana National Single Window, designed to enhance the country’s trade and economic development, secure, and increase government revenue at the various ports of entry, has saved the country about $500millions over the two and half years the system has been in place; an amount that would have found its way into private pockets and left a huge hole in government’s revenue.

“The Ghana National Single Window, which has been a topic of discussion over the years…. there have been adequate developments/foundation for the system to fully kick-start in the coming years and is expected to save the country about US$200 million annually,” the report which discusses developments, performance, managerial and governance issues and major constraints of businesses covering the period 2015-2017 noted.