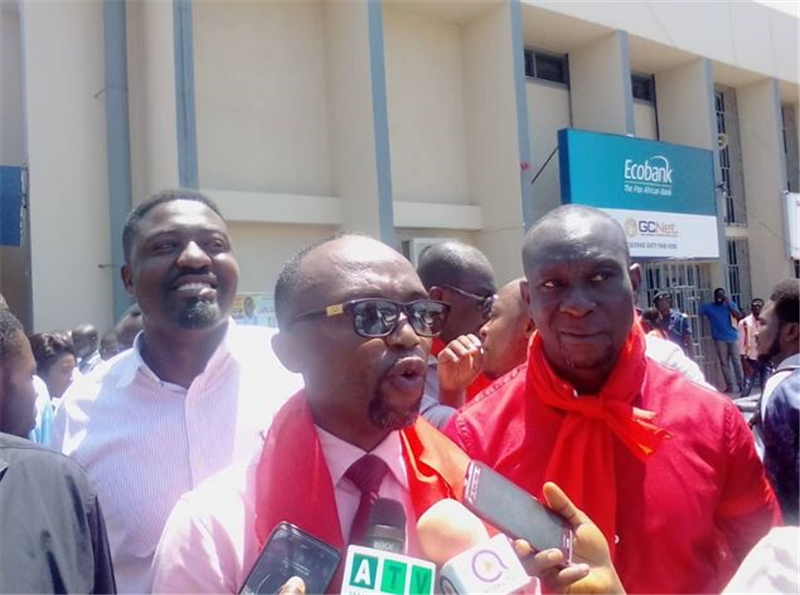 There is an uneasy calm within the country’s maritime industry with barely a week to the full take-off of the Cargo Tracking Note (CTN), as various factions within the shipping fraternity have taken opposing stands on its implementation.

Having served notice to the government about a week ago declaring their strike intentions, freight forwarders, operating at various entry points in the country, have laid down their tools pending the suspension of the system.

At an emergency meeting between the Customs Division of the Ghana Revenue Authority (GRA) and striking members of various freight forwarding associations in Tema on Monday, GRA officials implored freight forwarders to rescind their decision and attend to stranded shippers, however, that did not achieve any positive outcome.

According to the freight forwarders, they will only back down on their strike action if government suspends the CTN policy and allows for further discussions on its implementation.

As it stands, members of the striking associations will not make declarations or pay duties to Customs as long as the strike continues.

The Cargo Tracking Note is being introduced by the Ghana Revenue Authority (GRA) to help in its revenue mobilisation functions and to block avenues for smuggling and related trade malfeasances at the country’s ports.

The directive basically requires that all imports into the country should be covered by the CTN which gives a valid description of the goods in the container. Such a document will enable Customs to access all relevant information to help undertake valuation, keep track of all imports, and eradicate avenues for under-invoicing and smuggling.

Shippers are now divided over the directive. While one faction thinks the use of the CTN will block avenues for valuation disparities, provide a level playing field for all and enhance government’s revenue from the ports, the other faction thinks it will unduly burden shippers with extra costs, aside other technical hitches on the CTN system that have not been fully tackled.

Factions face off over CTN

The implementation of the CTN system has faced stiff resistance from the Ghana Institute of Freight Forwarders with the backing of sister trade associations including: the Ghana Union of Trader Associations (GUTA), Food and Beverages Association of Ghana (FABAG) etc. on the grounds of cost and other technical hitches they have identified with the system that have not yet been addressed.

GIFF and its allies, for instance, are of the view that the CTN, in its current form places the cost on the shipper—whose duty it is to acquire the document to cover his/her consignment before the goods can be cleared at destination port

They—freight forwarders—are also opposed to the idea that the cost of an intervention from government to address challenges in the goods clearance system at the ports should be borne by the already burdened shipper, especially when there are other recommended avenues where Customs could access such information without necessarily placing a levy on their heads.

But speaking to B&FT’s Obed Atta Yeboah, Deputy Commissioner, Operations, GRA, Seth Dwira, dismissed all such allegations and said the system will come at no cost to the freight forwarders, as government is ready to bear every cost that come with implementation of the CTN.

Another faction within the shipping community, the Frozen Food Importers Association of Ghana (FFIAG), has, however, backed calls for the planned full implementation of the programme.

According to the association, the implementation of the CTN will provide a level playing field in the current Customs duty payment and valuation regime.

“We are aware of instances where some members who have closer relationships with some officials at the ports enjoy preferential treatment by way of lower values for payment while others are valued highly, thereby causing retail price differentials that benefit only a few,” the FFIAG said in a statement released to the B&FT.

The association, in buttressing their stance, said the existing unfair valuation and duties that are charged to some of its members has led to the collapse of the cold stores of some.

The statement added: “We are therefore in full support of the GRA and government to, as a matter of urgency, implement the CTN system to address the disparities in our business.”

The concerns of FFIAG has been backed by three former presidents of the Ghana Institute of Freight Forwarders (GIFF) who have described the ongoing agitations as an attempt to sabotage a laudable initiative from the government.

The three: Kofi Brako, Member of Parliament for Tema Central and Managing Director of TeamWork Freight Services; Frank Sarpong, Managing Director of Fame Logistics; and Robert Kutin of All Ships Ghana Limited, said in a statement to the B&FT that the strike action is an attempt by the current GIFF leadership to stampede the government into taking an unpopular decision.

To them, the implementation of the CTN will bring more benefits to the country as it will ensure fairness to all industry players.

“As current members of GIFF, former leaders of this reputable institution and representing the silent majority of our members as a whole, we deem it fit to distance ourselves from this bad decision and confrontational approach to dialogue,” read the statement.

Per the statement, GIFF’s strike action will have harsh effect on consumers as it will increase the cost of doing business as a result of demurrage charges on goods and services at the ports.

It added: “At all times, the national interest must override personal and parochial interest of only a few people and we urge the current GIFF leadership to pursue the path of dialogue and not confrontation.”

We recall that just last week Monday, on the 20th of August 2018, a Deputy Minister of Finance, Mr Kweku Kwarteng met major stakeholders including the GIFF leadership as part of the consultation process and addressed most of our concerns. The meeting with the Deputy Minister of Finance, has been just one out of many consultations held with GIFF members and its leadership since February this year.

We are therefore surprised by the current leadership of GIFF decision to push for a full strike action at a time when consultations are still on-going and all challenges are being resolved for the good of the country.

We believe, at every material time, all decisions must be sound, justifiable, resonate well with all members and above all, take into consideration the Ghanaian consumers welfare.

GIFF’s decision therefore, is self-serving and does not inure to the benefit of the Ghanaian consumer whom we are mandated to serve at all times.

It is ironic to hear that GIFF claims to be fighting for the Ghanaian consumer, when in fact by this single action of GIFF to go on strike, they would indeed make the lives of consumers worse off by increasing the cost of doing business as a result of demurrage charges on goods and services at the ports.

We therefore urge all members who are against this strike action to go about their duties without fear or favour and with the conviction that the Ghanaian consumer must not suffer unduly because of the inaction of the GIFF.

We, the undersigned former Presidents of GIFF are convinced that the implementation of the CTN will bring more benefits to the country such as ensure a fair and a levelling playing field for all industry players, not just for a few as well for national security purposes such as to avert the importation of unwholesome goods into the country.

We wish to draw the attention of all stakeholders that since the project is on pilot basis for now, it will be only prudent to exercise patience for the exercise to end to know the benefits or otherwise of the project to the country before taking any major decision.

At all times, the national interest must override personal and parochial interest of only a few people and we urge the current GIFF leadership to pursue the path of dialogue and not confrontation, the statement ended.