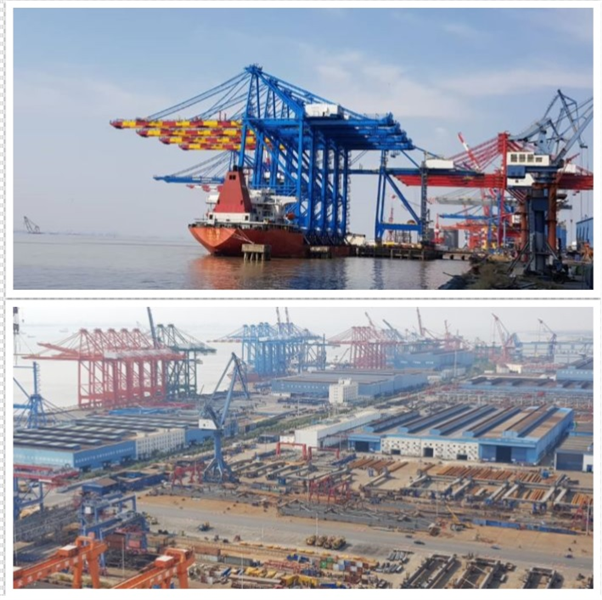 The first batch of cranes are being loaded and set to sail from Shanghai to Tema after the final inspection and approval of the fully assembled cranes that have undergone the testing cycle throughout the production stages. The first batch consisting of 4 Ship-To-Shore (STS) and 8 electric Rubber Tyre Gantry (eRTG) gantry cranes out of the total 27 expected cranes for the monumental project.

The Tema Port Director of Ghana Ports and Harbours Authority (GPHA), Mr. Edward Osei, accompanied The CEO of Meridian Ports Services Limited (MPS), Mr. Mohamed Samara on this final inspection mission to the ZPMC factory where the cranes were constructed and tested.

Mr. Osei was impressed with the sophistication observed on the ZPMC heavy industrial complex as well as the workmanship quality and punctuality that enabled the delivery of the 27 new gantry cranes for the new Tema Port Expansion on schedule.

The first batch of cranes are expected to arrive at Tema Port on 19th December. Work is currently far advanced on the new port infrastructure with completion of the first berth due in the first week of December to receive the consignment of new cranes. Mr. Samara expressed delight that all contractors have fulfilled their end of the bargain to deliver on target.

The new Ship-To-Shore gantry cranes are the world’s top class. They were meticulously designed and opted for to boost productivity with operating capabilities into the future. These High-tech STS cranes are Super-Post Panamax with capacity of servicing the world’s largest vessels (66 meters Outreach capable of handling containers up to the vessels’ 23rd row and over 10 containers high on deck). All cranes are fitted with twin-lift spreaders with up to 65 ton.

It is worthy to note that MPS Terminal has the highest level of concentration of liner shipping services in West Africa with 16 Shipping Lines co-sharing 11 regular weekly services. Also, Tema Port has the lowest Anchorage Time attributed to being the first West African Port to offer fixed Berthing Window to the main Liner Services while delivering the fastest Vessel Turnaround Time.

The CEO of MPS indicated that the new MPS Terminal facility will be the largest port Infrastructure & Superstructure in the region. He added that MPS will continue to accomplish its core mandate of delivering maritime efficiency in all of its operations.  “… the efficient port accessibility, added infrastructure capacity along with the sophisticated port handling equipment and state of the art port technology will in effect make Tema Port the Hub Port on the western coastline of Africa” said Mr. Samara.

MPS is spearheading the construction of the biggest Port in West Africa which will set the tone for Ghana to compete as one of the best seaports in Sub Saharan Africa.

As part of this massive investment, the Minister of Transport in August 2017 led a delegation from Ghana comprising GPHA and MPS to sign an $80 million agreement for the purchase of the biggest single crane consignment from West Africa requested from Shanghai Zhenhua Heavy Industry Co., Ltd (ZPMC), renowned manufacturers of the world’s most cutting-edge shipping cranes.