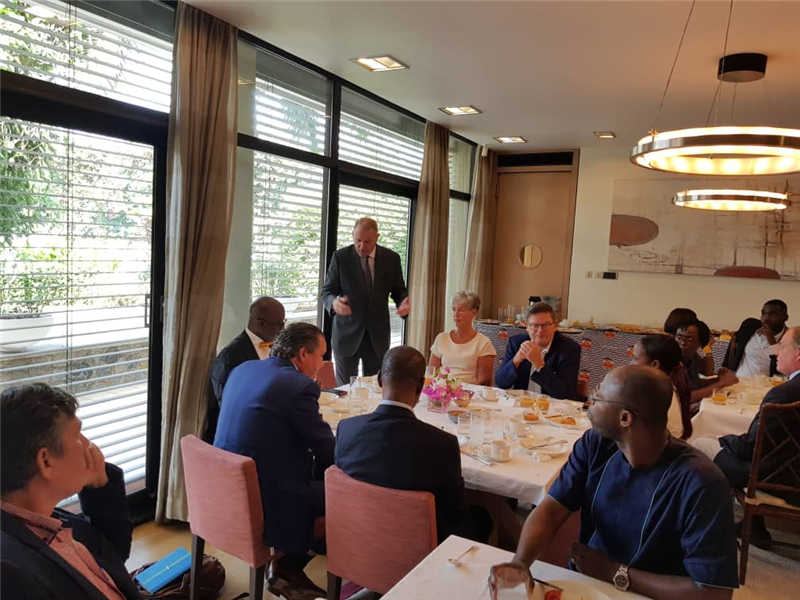 Last Wednesday GNBCC organized,  in co-operation with the Dutch Ambassador Mr Ron Strikker, a business breakfast at the Ambassador’s Residence for our Premium Members with Mr Yofi Grant, CEO of the Ghana Investment Promotion Centre (GIPC) as a special guest. Exactly one year ago we held the 1st breakfast at the same place with Mr Grant. We wanted to hear the state of Ghana one year after as well offer the opportunity to our Premium Members to ask questions and share actual experiences of doing business in Ghana.

After the opening, our Ambassador Mr Ron Strikker thanked Mr Grant to be present now for the 2nd year and stipulated the importance of this annual event for GNBCC and its Premium Members. Mr Grant first held a speech about the gains of this government which are many: there is now macroeconomic stability, the government brought down debt to GDP ratio, it brought down the deficit, the interest rates dropped, inflation dropped and electricity prices went down.  IMF is happy with Ghana because there is now fiscal responsibility. Bad debts which are still there are a heritage from the old government. Furthermore, he spoke about achievements such as free SHS and the 1d1f project.

GNBCC’s General Manager Tjalling Wiarda thanked Mr Yofi Grant and congratulated Mr Grant with government’s achievements. After that, he spoke about the gap between the top in government and what is actually happening in practice, in day to day business. Subsequently he testified about some major challenges for some of the GNBCC Members such as the increased costs of doing business by for instance the VAT 3% flat rate which operates as a sales tax for most companies as well as the restructuring of the VAT to 12,5% and to a Health and Education Levy of 5%; this  straight levy has created increased costs for manufacturers as opposed to importers which contradicts government’s intention.

A good discussion followed and also other challenges were discussed such as that most tax measures (tax stamp, CTN), which are supported by the business community, seem to be only applied to the formal sector especially to larger companies and foreign investors. Also, GIPC was informed about tax activities of some municipalities such as Tema and Kpone who compete with each other and issue huge increases of existing taxes or introduce brand new taxes on companies in Tema. In a reaction, Mr Grant called up on companies who have been unfairly treated to send a letter to the GIPC. GIPC has a team who helps GIPC registered companies when confronted with unfair treatment. It was a very fruitful and constructive breakfast for all parties involved and will be repeated next year!