Groundbreaking Ceremony for Construction of the Koudijs Feedmill 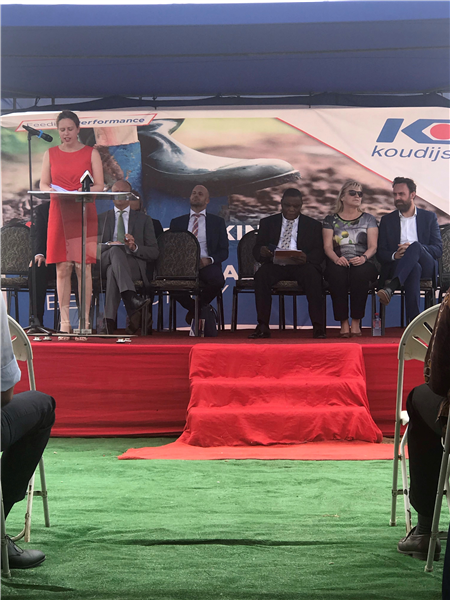 Koudijs Animal Nutrition, a member of GNBCC, is the leading organization in the Animal Nutrition Industry. It focuses on the production, sales, and service of complete animal feed as well as concentrates and premixes. Originally founded in the Netherlands in the early 19th century, it has since expanded all over the world and recently arrived in Ghana.

Last Wednesday, the 6th of February, 2019, Koudijs held an event for their new factory in Tema. Accompanied by the General Manager of Koudijs Mr. Hugo Visscher were the Dutch Minister of Agriculture, Nature and Food - Ms. Carola Schouten, the Minister of State in charge of Poultry - Dr. Nurah Gyiele, the CEO of De Heus Animal Nutrition Mr. Koen de Heus, the Dutch Ambassador - Mr. Ron Strikker as well as various stakeholders and contractors.

After a brief opening prayer given by Rev Fr Sam Wood, Mr. Visscher gave an opening speech regarding Koudijs’ business in Ghana. The construction of a new state of the art factory, which will be led by top Ghanaian engineers and contractors will be the new pathway to shifting to local production. Mr. Visscher assured that the construction of the new factory enables Koudijs to grow together with their partners in the Ghanaian Agricultural sector. Also, it is expected that by 2022 there will be more than 100 factory employees, therefore reaching out to hundreds of poultry and fish farmers. The increase in production subsequently creates direct and indirect jobs all over Ghana.

Following Mr. Visscher’s opening speech, Mr. Koen de Heus gave some remarks about Koudijs, stating that after expanding to African countries over the years, now was the time to invest in Ghana. De Heus Animal Nutrition strives to improve the future and livelihood of farmers, not only in Ghana but worldwide. Mr. De Heus stated that through Koudijs’ customized animal nutrition, they are able to increase productivity, improve animal conditions and reduce environmental impact in over 75 countries. De Heus’ investment in Ghana demonstrates their trust in the development of the Ghanaian economy, specifically in the agricultural sector.

Furthermore, the Dutch Minister of Agriculture, Nature, and Food, Ms. Schouten gave a speech regarding the methods in which the Netherlands and Ghana can help each other achieve their agricultural goals. The new factory will help both countries move closer in achieving these goals. In addition to this, Ms. Schouten addressed the symbolic tree that was planted to show the ever-growing relationship between Ghana and the Netherlands. Koudijs believes in the philosophy that we must find multiple ways to be sustainable; sourcing locally, minimizing food loss, and reusing waste and national and international levels. Koudijs will combine local production and on-farm advice to help farmers grow at their own pace. Koudijs is one of the first European companies to set up animal feed operations in Ghana. With over 100 years of experience, it is believed that Koudijs is able to help Ghana in pushing for its agricultural goals.

Finally, representing Ghana, the minister of state in charge of poultry, Dr. Nurah Gyiele stated that this project promises to make a major improvement to the agricultural agenda. In spite of the huge local demand for poultry meat and fish, Ghana produces less than 50% of fish and poultry meat demands. The demand for poultry meat and fish is also rising rapidly due to an increase in population, increasing urbanization and rising per capita income. This causes a great cost of importing the majority of Ghana’s fish and poultry meats. Koudijs is expected to greatly improve the gap between high demand and low local supply and therefore is thanked by the government.

After the speeches were delivered, a tree was planted as a symbol for the growing trust of Ghana and The Netherlands, following this, the symbolic wooden Dutch shoe (klompen) were gifted to Dr. Nurah Gyiele, Mr. Koen de Heus, and Ms. Carola Schouten.

In conclusion, Koudijs will be of great impact in Ghana from increasing job opportunity directly and indirectly, by opening a state of the art factory, to advise Ghana in becoming a more self-sustaining country, help improve the livelihood of farmers in Ghana and finally improve economic structure in the agricultural sector.