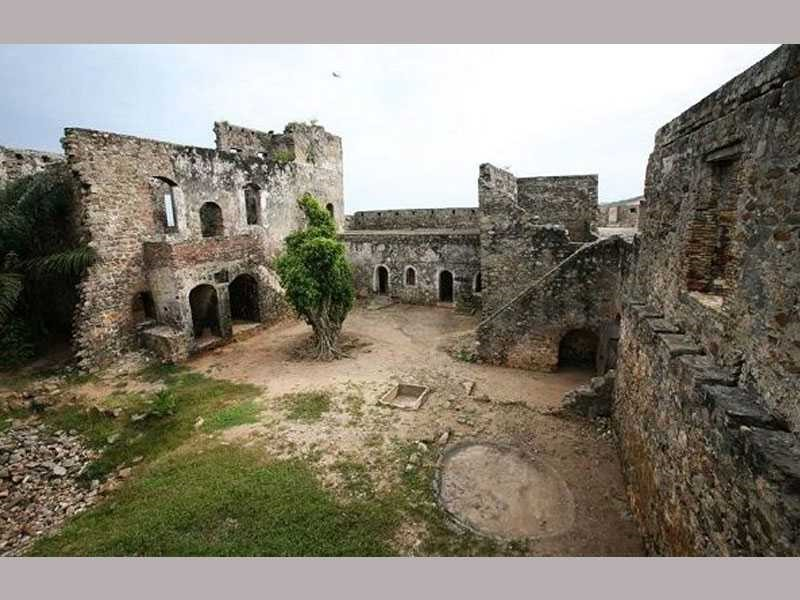 History: Fort Amsterdam is a fort in Kormantin, Central region, Ghana. It was built by the English between 1638 and 1645 as Fort Cormantin or Fort Courmantyne, and was captured by admiral Michiel de Ruyter of the Dutch West India Company in 1665. It was subsequently made part of the Dutch Gold Coast, and remained part of it until the fort was traded with the British in 1868. The Fort is located at Abandze on the north-east of Cape Coast in the Central Region of Ghana. (source Wikipedia)

The European Union (EU) has handed over the site of Fort Amsterdam in the Mfantseman Municipality in the Central Region for restoration work to commence.

This follows the release of GH¢30 million by the EU for the full restoration and adaptive re-use of the fort in accordance with the guideline of the UNESCO convention.

Fort Amsterdam is a fort at Kormantin.

It was built by the English between 1638 and 1645 as Fort Cormantin or Fort Courmantyne.

The new project is expected to create jobs for more than 6,500 people, with the benefit extending to Mfantseman Municipality and the Central Region as a whole.

The EU Ambassador, Mrs Diana Acconcia, said the fort was selected in a competitive process among 70 others.

That, she said, was based on the EU’s recognition of building on heritage and culture as an engine for local development.

“This project is fully in line with the EU’s priorities because of its balanced approach between the need to boost growth and to create jobs on one side and the preservation of this historical site and local tradition on the other,” she said.

She said tourism in the country had a great potential and added that it was a renewable resource with important linkages to the global concerns about the environment and the climate.

She said the restoration of the fort should be a driving force for social and economic development and a contribution to the identity of the community and its social traditions.

Mrs Acconcia said individual beneficiaries would include the youth and women who would be provided with capacity building and job opportunity on construction, tourism and the making of handicrafts.

The Acting Executive Director of Ghana Museums and Monuments Board, Mr Kingsley Ofosu Ntiamoah, said the project would be implemented through on-site sharing and transfer of technical know-how to the indigenous artisans, including staff of the board.

He urged Ghanaians to support the President’s commitment to develop the tourism sector by contributing their best in whatever way they found themselves.

Addressing the durbar of chiefs and people to mark the day, the Central Regional Minister, Mr Kwamena Duncan, expressed concern about the chieftaincy dispute in the area and called on both factions to bury the hatchet and work towards the development of the area.

“I can assure you that this project will facelift the area and boost our economy, but these cannot thrive on disunity and confusion,” he told the chiefs.

The area, for years now, has been plunged into chieftaincy factions, with two people laying claim to the stool.

The minister indicated that the current chieftaincy dispute would not augur well for job creation and the preservation of the facility and called for an immediate solution to the problem.