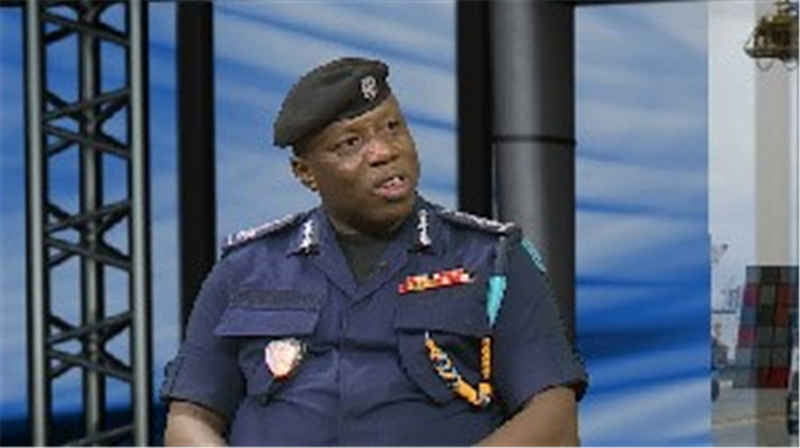 The Tema Port Sector Commander of the Customs Division of Ghana Revenue Authority, Dr. Godfred Okoh-Appiah has revealed that Customs have improved their systems to enhance their activities at the port.

He said this on the new interactive platform of eye on port which now allows the general public and customers of the port to engage with key players in the port community on issues pertinent to the industry live on national television.

In harmony with eye on port’s initiative to bring clarity to the general public of the specific roles of key industry players, the Assistant Commissioner of Customs described his outfit’s role as the state institution responsible to collect import duties as revenue for the state as well as control items that come in and leave Ghana’s borders.

“All that it takes for customs to access, collect and account for the taxes on imports at the ports, happens to be the key function of customs. Then, when it comes to the non-revenue side, we also enforce laws governing prohibition and restriction in the country,” the Assistant Commissioner stated.

He educated the public that duties taken by customs is only a part of the total charges importers pay for the general clearance of items.

According to the Tema Sector Commander of Customs, those specific charges are always evident in the customs declaration of which every importer should have access to. This he advised would prevent importers from falling victims to fraudulent clearing agents.

He said trade facilitation, which is among the functions of the division is achieved by peak risk management using modern innovations to ensure quick but thorough examinations of goods during clearance at the port.

“For the paperless system, there is no need printing custom documents here and there and be carrying them around. Everything is done electronically and all the agent need is custom declaration number and they can call any customs office to be attended to. Also, Customs, Food and Drugs Authority, Ghana Standard Authority, all join and inspect the goods. The JIMIS is another innovation that reduces the inspection,” the Assistant Commissioner outlined.

The Customs officer in charge of Tema Port defined the various categories of items his outfit examines during clearance at the ports. He said every category of goods has its designated regulatory agency that assists customs in its clearance.

“The non-revenue functions are laws for other agencies that we help enforce, including Food and Drugs Authority- permit to clear pharmaceuticals, chemicals, food items. When it comes to household electronic goods, then Ghana Standard Authority comes in. When it comes to arms and ammunitions then the ministry of interior and the police,” he explained.

Dr. Godfred Okoh-Appiah also took some time to explain customs processes when it comes to clearance of goods at the Port.

“Pre-arrival time means the agent should submit electronically all the trade documents and shipment documents to the Customs Technical Services Bureau (CTSB) for pre-arrival reporting assessment to be done. That is where they obtained the CCVR. The data on this report is what the agent will use to lodge the customs declaration. It is the custom declaration which serves as the authority for the goods to be examined.

"So when the customs declaration is passed, the agent will go to the bank and pay the duty there. After payment the declaration will be sent to compliance at the customs headquarters. The officers there would do documentary verification to check all the information provided on the declaration, because at that point, that the decision as to which regime the importer or agent is subjecting the goods to is indicated before the declaration is routed to the port for examination.” The sector commander educated.

He revealed that cargo which fails to be cleared from the ports are subjected to seizure after 60 days of stay at the ports, in accordance with Customs Laws. However, there is a grace period given for appeals to be made to retrieve overstayed goods. These goods according to him, are after, declared for the state, and placed for allocation or public auction.

“60 days after the discharge of the cargo of the vessel that brought your vehicle, you have forfeited your vehicle to the state. These are provisions of an act we are enforcing. Within the period, there are some privileges. You can apply to the Commissioner General. When approval is given, you come to the port and we override the block in the system which would enable you effect your payment and take your vehicle,” he disclosed.

The Tema Sector Commander, lamented diversion of goods as well as under declaration and misdescription of items with the aim of misleading Customs on the part of importers or clearing agents as some of the organisation’s major challenges.

“The challenges are under-declaration, and misdescription. These are most of the infractions we encounter. Diversion, also is a terminology we use for goods declared for transit but are fail to get to their destination country but find their way to the domestic market. This deprives us from getting our due revenue,” he said.

He warned that customs have a very potent risk management system that would not only detect false activity on the part of the importer or agent, but also come with severe penalties.

“So, on suspicious items, they are flagged red on our risk management system, and physical examination is conducted. So, with this arrangement, when importers see the proper scrutiny the system would subject their goods to, and they’ll be caught and made to pay the due import duty and penalty which will serve as a deterrent,”  he added