Successful Business Breakfast on Investment in Liberia and Sierra Leone 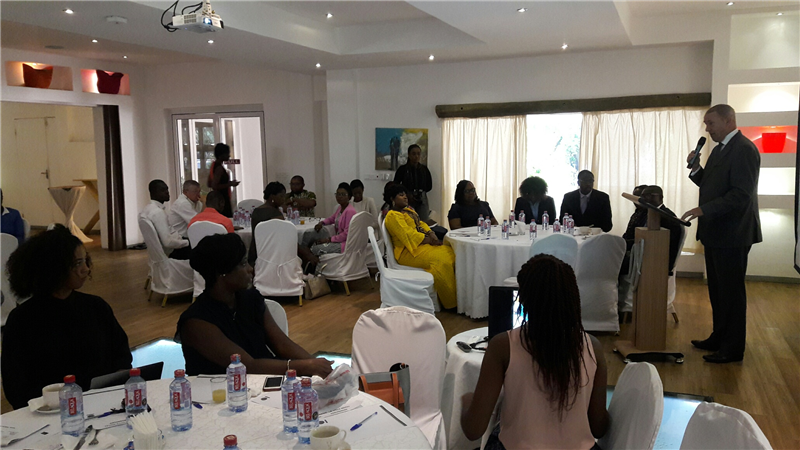 Last Tuesday GNBCC organised a business breakfast on Investment in Liberia and Sierra Leone in the Villa Boutique Hotel in Accra. After a brief welcome and introduction of the speakers by GNBCC”s GM Tjalling Wiarda, the Dutch Ambassador Mr. Ron Strikker held the opening speech.

The Ambassador explained how the Dutch organised in 2015 the 1st trade mission to both countries just after the Ebola crisis. This to contribute to the economic restoration of both countries after the devastating Ebola outbreak. After the trade mission GNBCC, as requested by the Embassy, provided follow-up assistance in Liberia and Sierra Leone and facilitated local participation in the investment conference in The Hague. The follow-up assistance lead to the setup of two GNBCC subsidiaries, the LNBCC in Liberia and the SLNBCC in Sierra Leone. Last September a 2nd  investment conference was held in The Hague. After that GNBCC launched the idea to organise a business breakfast on investment in SL and Lib  in Ghana because the step to invest in Liberia and /or Sierra Leone for companies who already have been established in Ghana might be more logical and easier compared to companies from The Netherlands who have never been active in West Africa.  The Ambassador also mentioned that there are a number of financial instruments which are offered by the Netherlands Enterprise Agency which can help companies to make that investment step into both countries.

The 2nd speaker was the High Commissioner of Sierra Leone, Mrs. Frances Virginia Anderson, she told the audience about beautiful Sierra Leone, its history, people, natural resources and important sectors. Agriculture ‘makes’ 45% of GDP Sierra Leone and 65% of the SL People work in Agric. After her excellency, SLNBCC’s Mrs. Binta Jalloh and Ms. Esther Kamara held a joint presentation on investment opportunities in Sierra Leone. In the presentation, a number of sectors were highlighted such as  Agriculture (cocoa), Energy, Logistics (ports and shipping), Mining and Health. For some of these sectors, SLNBCC has also produced sector scans in which each sector has been researched on opportunities. After Mrs. Jalloh and Ms. Kamara's presentation, Mr Stanley Slagmolen of the LNBCC held a presentation on the investment opportunities in Liberia. He first explained  about the country itself, its people, government and politics. Mr. Stanley highlighted the opportunities in (road) construction, agriculture (cocoa and rubber) and fisheries, repair or maintenance service and mining.

The final speaker was Mr. Maurits Verhagen of Universal Delft; Universal Delft is active in more than 9 Sub-Sahara African countries including Sierra Leone and Liberia. In Ghana, they are dealing in digital imaging systems such as X-ray. The origin of their investment in Ghana was an ORIO project concerning TB detection. They offer CAD4TB – Computer-Aided Detection for TB. In Liberia they installed an X-ray system and CT scan to a Diagnostic Centre in Monrovia and in Sierra Leone they installed two portable x-ray systems for TBC. In both countries, they employ local technical representation.

Anybody who is interested in the presentations held by Ms. Esther Kamara of the SLNBCC and/or Mr. Stanley Slagmolen of the LNBCC, please send an e-mail to Tjalling Wiarda requesting for these presentations.