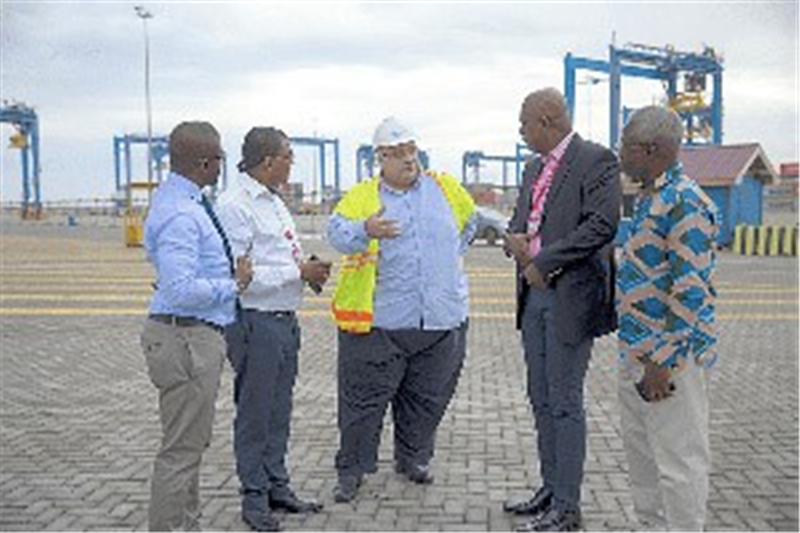 The first phase of the $1.5 billion Tema Port expansion project will be formally opened for business today. To be managed by Meridian Port Services (MPS) Limited, the project is a joint venture between the Ghana Ports and Harbours Authority (GHPA), on the one side, and MPS Limited, Ballore Transport & Logistics and APM?Terminals, on the other.

Designed to provide world-class harbour infrastructure for the next 100 years, the new port will be run 24 hours, seven days, a situation that will help improve the turnaround time at the port and make it competitive as the most preferred in the sub-region.

The project, which saw the building of a 3,550-metre long breakwater (a barrier built out into the sea to protect the harbour from sea waves), also saw the harbour basin being dredged to create a 16-metre draft to accommodate bigger vessels.

There are three major buildings within the port — an office building for the regulatory authorities, comprising the Ghana Revenue Authority (GRA), the Ghana Immigration Service (GIS), the GPHA, National Security, the Food and Drugs Authority (FDA) and the Ghana Standards Board (GSA); a building for the MPS, from where the port will be managed and controlled, and a workshop for the maintenance and repair of equipment.

The concept is built around the vision to make the port a one-stop shop to enhance the processing of documents and handling, necessary for improving the turnaround time, based on the government’s efforts to make the port area a completely paperless zone.

The phase one of the semi-automated facility, with modern terminal operating systems and optical character recognition applications for recognising container and vehicle numbers, has three berthing facilities capable of holding some two million twenty-equivalent units (TEUs), an increase on the Tema Port’s current one million TEUs capacity.

It also has a platform for intrusive examination of cargo, two separate sophisticated scanners for imports and exports, a large holding area for the storage of containers, a refrigerated facility, as well as a 20-kilovolt power station to cater for the internal power needs of the facility.

The Chief Executive Officer (CEO) of MPS, Mr Mohamed Samara, briefed a team of officials from the Graphic Communications Group Limited (GCGL), led by its Managing Director, Mr Ato Afful, on the project when they paid a working visit to the project site last Tuesday.

“This is a major infrastructural facelift of the Tama Port and it is expected to pave the way for the country to become the maritime hub in the sub-region,” Mr Samara said.

He expressed optimism that the effort to drastically improve the ease of doing business in the country would be achieved because the expansion works would also improve turnaround time at the port, as well as consignment throughout.

Mr Samara said the new infrastructure made claims for a chain of value creation for all aspects of Ghana’s economy, which was expected to increase productivity.

The increased capacity, he said, would lead to a reduction in freight cost, which would also further strengthen the Tema Port as the most efficient gateway for cargo in the sub-region.

While lowering transport and logistics costs, Mr Samara said, there would be better export competitiveness, cheaper imported inputs and consumer goods, among many other benefits.

All those, he said, would help boost the country’s Gross Domestic Product (GDP) — the total value of the goods and services produced in the country.

Mr Samara explained that the new port had been fitted with 27 giant cranes, some of the tallest anywhere in the world, comprising seven ship-to-shore gantry (STS) cranes on the water front and 20 rubber tyre gantry cranes in the yard.

“The STS?cranes are not only one of the largest fleet ever purchased in West Africa but also the most advanced in the world, standing at a towering height of 89 metres and 134 metres when boomed up,” he emphasised.

He said close to 60 local contractors and suppliers in areas such as trucking, operations, technical, security, various professional services, as well as spare parts and consumables, had been engaged.

He added that on completion of the entire project, about 1,900 jobs would have been created, a move which would help with technology transfer processes.