"It's sad" Corruption Fighting back at Domelevo, Amidu – Danish Amb. 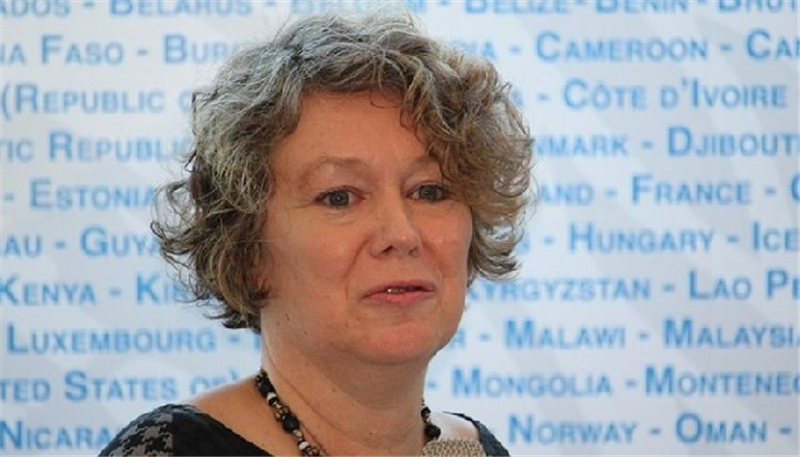 The Danish Ambassador to Ghana, Mrs Tove Degnbol, has expressed worry about the attacks on the reputation of the country’s Auditor-General Daniel Domelevo and Special Prosecutor Martin Amidu.

Speaking at the inaugural Ghana Integrity Awards ceremony organised by the Ghana Integrity Initiative (GII) on Monday, 9 December 2019, Mrs Degnbol said: “It is particularly sad to see that certain public institutions are doing their utmost to put hindrances in the way for integrity institutions such as the Auditor-General’s Office and the Office of the Special Prosecutor on anti-corruption”.

“As we are approaching an election year, the attacks against integrity institutions and individuals contributing to fight corruption seem to be on the increase. This is noted with a lot of concern by many in the international community.

“The Auditor-General has said you cannot fight corruption without corruption, fighting you. This is sad. But apparently true in Ghana, where constant attempts to challenge mandate and personal integrity and systematic hindrances of efforts to fight corruption seems to be the prize to pay for those brave enough to take up the fight,” she added.

She urged Ghanaians to make “corruption a high-risk enterprise as the Special Prosecutor Martin Amidu has called for”.

Attacks on Domelevo and Amidu

Recently, there have been a back-and-forth between Mr Domelevo on the one hand and the Office of the Senior Minister, Mr Yaw Osafo Marfo as well as the Economic and Organised Crime Office (EOCO) on the other hand.

Mr Domelevo surcharged Mr Osafo Marfo for supervising the payment of $1 million to private firm Kroll & Associates for “no work done”, according to the 2018 Auditor-General’s report.

Just around the same time that Mr Domelevo was having his duel with the Senior Minister, EOCO launched a full-scale investigation into alleged procurement breaches against him vis-à-vis the purchase of some vehicles for the Audit Service.

A private citizen lodged a complaint with the state investigative body against the Auditor-General, the Deputy Auditor-General (Finance and Administration), Mrs Roberta Assiamah-Appiah, and the Audit Service Board, accusing them of circumventing the procurement laws.

Mr Domelevo, however, denied all the allegations and described the petition as a “storm in a teacup.”

In a letter to EOCO dated 18 November 2019, Mr Domelevo said: “You would recall that for close to four weeks now, your office has been inviting officers from the Ghana Audit Service including myself on the premise of investigating alleged procurement breaches in respect of some vehicles procured by GAS in 2008 for effective conduct and delivery of audit activities.

“I was personally invited by a letter dated 7 November 2019, which invitation I honoured out of respect for your office on 14 November 2019 only to be cautioned by your officers and asked for a caution statement which I gave. I had had to be granted bail – thanks to my driver – before I was allowed to leave your premises.

“A careful reading of your enabling law, the Economic and Organised Crime Act, 2010 (Act 804) as amended by the Office of the Special Prosecutor Act, 2017 (Act 959) and from discussions with my lawyers, I am of the firm belief that your office does not have the mandate to investigate any breaches under the Public Procurement Act.

“In fact, I am advised that the relevant provision in Act 959, which amended Act 804, is section 80, and therein, your office’s mandate to investigate corruption and corruption created offices, which has been defined to include procurement breaches, has been taken away.

“Thus, this power your offices purports to exercise now has been effectively taken away by the amendment contained in section 79 of Act 959.”

However, in response, EOCO, in its statement, said: “Per section 3 of Act 804, the functions of the Office (EOCO) are to (a) investigate and on the authority of the Attorney General, prosecute serious offences.”

It explained that serious offences are further defined in section 74 of Act 804 extensively and not restricted to corruption-related offences.

According to the statement, Section 79 of the Special Prosecutor Act, Act 959, is limited to corruption-related offences under the category of the serious offence of the EOCO Act.

“It does not oust the jurisdiction of EOCO from investigating other serious offences that are not necessarily of a corruption-related nature,” it added.

EOCO said the investigations are in line with its legal mandate.

Subsequently, the Auditor-General filed a suit in court over the matter. In his writ, Mr Domelevo said: “I have been advised by my lawyers and verily believe same to be true that [the] Respondent [EOCO] has no statutory mandate to investigate the [Audit] Service and myself, either jointly or individually for any offences relating to breaches of the procurement laws of the Republic of Ghana”, since, according to him, matters of that nature are “within the statutory province of the Office of the Special Prosecutor.”

He insisted “EOCO is clearly acting with impunity and without regard for due process and the rule of law and above all my constitutional right to administrative justice”, adding that allowing the probe to go on will amount to allowing EOCO’s “ultra vires acts to go unchecked for which I shall continue to suffer irretrievable hardship, damage and harm as [the] Respondent will disrupt my constitutionally- and statutorily-mandated duty to the Republic.”

“It is just convenient for the court to intervene to restrain EOCO from continuing with its illegal and unlawful investigations and arrests of officers of the Audit Service pending the determination of the present suit as the balance of convenience is in Applicant’s favour”, Mr Domelevo said, noting that he dragged the Crime Office to court because “EOCO is hell-burnt on carrying on its purported investigations and has no plans to stop unless this honourable court intervenes.”

The A-G is seeking an “order of interlocutory injunction restraining EOCO by itself, its servants, agents, and all such persons however called, from undertaking or continuing to undertake any investigation of the Audit Service and Applicant for alleged breaches of the Public Procurement Act, 2003 (Act 663).”

As far as Mr Amidu is concerned, he has, on several occasions, publicly vented his frustration through articles and media interviews about how his work is being frustrated by appointees of President Nana Akufo-Addo.

He has also faced a barrage of criticism over the manner he has been complaining about the lack of logistics and resources for his three-bedroom office.

Just on Monday, 9 December 2019, investigative journalist Manasseh Azure Awuni said it is “strange” and “unacceptable” that Mr Amidu does not think his “frustrations” are the handiwork of President Nana Akufo-Addo.

Speaking to Benjamin Akakpo on Class91.3FM’s Executive Breakfast Show about his impressions of the Office of the Special Prosecutor, the anti-graft journalist wondered why Mr Amidu has always been “ranting” about how appointees of the President, except the President himself, are frustrating his work.

“One of the major antidotes that this government prescribed was the Office of the Special Prosecutor; that’s Mr Martin Amidu’s outfit. But anybody, who has followed keenly, will agree with me that office has not lived up to its expectation and Mr Martin Amidu has released a number of statements [and] articles ranting and blaming everyone else for what he describes as frustrations his office faced but the President.

“And what I did not agree with him [on] was when he stated that government institutions and ministers were frustrating his efforts and the President even stepped in to make them obey but they were still adamant.

Meanwhile, Mr Awuni believes the Office of the Special Prosecutor is a failure and has given it a poor rating.

“If I’m to score the Office of the Special Prosecutor, I’ll score him 20 per cent”, the said, adding: “20 per cent is even generous because we have a President who wins an election and says: ‘Look, I’m going to fight corruption and one of the main tools I’m going to use is ‘A’”.

“Today is 9 [December 2019]. 9 December 2016 was exactly when he [Akufo-Addo] was declared winner [of the 2016 general elections], and by 7 December next year, we should be going to the polls to elect a President, so, we can say he’s done about three years. Out of the four years, he has only one year [left], so, his main anti-corruption tool, how many prosecutions have we seen?” he asked.

In Mr Awuni’s view, Mr Amidu has failed to use his office to go after weightier graft cases but rather focusing on the alleged evasion of taxes (GHS36,000) by Bawku Central MP Mahama Ayariga.

“I’m not saying there’s no case or whatever in Ayariga’s issue, but if after one year we have hundreds of millions of cedis wasted and then the Special Prosecutor is going after some GHS36,000, the Special Prosecutor could have also looked at the GYEEDA report; there are a lot of things in there, a lot of low-hanging fruits worth hundreds of millions of cedis that this office should have developed an interest in, but you spend all your energies chasing Ayariga worth some GHS36,000, then where I sit and what I know, I wouldn’t take that office seriously until it proves itself worthy of being taken seriously because I was one of those who felt the Office of the Special Prosecutor was very good and I even wrote an article commending the President for appointing Martin Amidu because I felt he was the best person to have been appointed, but from where I sit, I see that office as a failure until that office proves otherwise”, he noted.

Mr Amidu filed a suit against the MP at an Accra High Court in connection with the alleged tax evasion.

Mr Ayariga allegedly paid GHS6,062.86 instead of GHS36,591.15 at the port for the importation of three second-hand Toyota Land Cruisers while serving as a minister of state under the erstwhile Mahama administration.

In January this year, Mr Amidu secured an order from an Accra Circuit Court which directed mobile network operator MTN to produce the call records of a conversation between the lawmaker and an officer of the Ghana Revenue Authority (GRA).

Mr Amidu told the Accra Circuit Court “2” presided over by Mrs Ruby Naa Adjeley-Quayson that the Office of Special Prosecutor (OSP) had already obtained an order to conduct a forensic examination on three mobile phone numbers from the Director-General of Criminal Investigations Department (CID) of the Ghana Police Service.

In August 2018, Mr Amidu reported Mr Ayariga to the Economic and Organised Crime Office (EOCO) for allegedly attempting to frustrate his investigation into the tax evasion matter.

Mr Amidu alleged that Mr Mahama kept sending influential people such as chiefs, pastors and opinion leaders to plead for mercy on his behalf, an allegation the Bawku Central MP denied