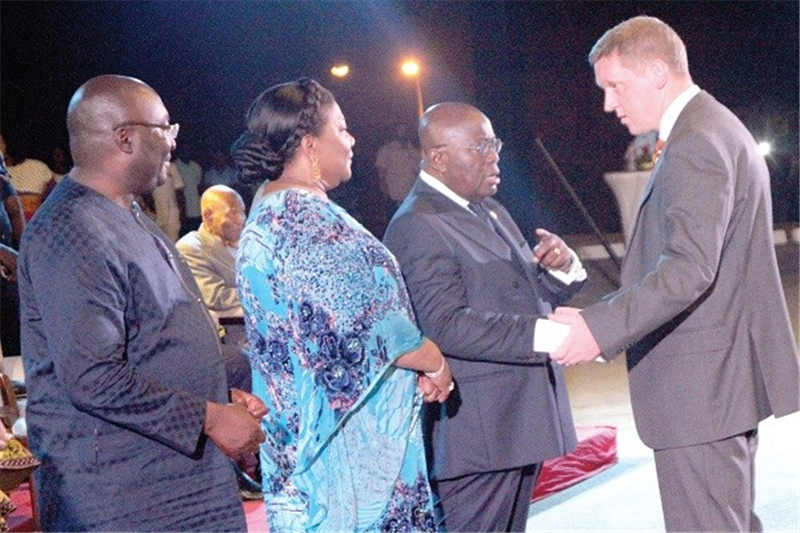 The President, Nana Addo Dankwa Akufo-Addo, has urged the diplomatic community in the country not to hesitate to report any evidence of corruption against any government appointee for action to be taken on it.

That, he said, was better for the relations between Ghana and its development partners than the unspecified, generalised pronouncements on corruption that were often thrown around.

“Should you, members of the Diplomatic Corps, be noticed of any evidence of corruption against any of my appointees, I insist that it be shared with my office to enable action to be taken on the matter. The war against corruption will not be won overnight, but with political will, it will be won,” he assured the diplomatic community, adding: “I did not come into politics to enrich myself but to serve the public interest.”

President Akufo-Addo said this at this year’s New Year Diplomatic Greetings and Reception for diplomats in the country held at the Peduase Lodge, near Aburi in the Eastern Region, last Tuesday.

The New Year Diplomatic Greetings and Reception offered members of the Diplomatic Corps the opportunity to exchange messages of goodwill towards the sustenance of the friendly relations and fruitful cooperation among Ghana, the diplomatic community and its people.

The President said the government had shown its commitment to the fight against corruption over the last three years, not just in words but, more importantly, in deeds and mentioned the establishment of an independent Office of the Special Prosecutor to focus on the prosecution of corruption-related offences and the introduction of specific new laws that had been enacted to that end.

“Every single alleged act of corruption levelled against any of my appointees is being or has been investigated by independent bodies such as the Commission on Human Rights and Administrative Justice (CHRAJ), the CID and in some cases Parliament itself,” he said.

He announced that two appointees of the Executive were still being investigated, saying none of those state agencies had ever indicated any pressure from the Executive over its investigations.

“It is a matter of public record that 21 officials of the previous administration are standing trial over their involvement in or alleged acts of corruption or causing financial loss to the state, and prosecution of the persons, that is, the regulators and the individuals, allegedly responsible for the banking sector crisis, has commenced,” the President added.

According to President Akufo-Addo, the government had systematically increased funding for the accountability institutions of the state, such as Parliament, the Judiciary, the Office of the Attorney-General, CHRAJ, as well as the Auditor-General’s Department.

Those five, he stated, had a 25 per cent increase in funding allocation in 2017 over the 2016 allocation.

On protecting the public purse, the President said GH¢2.75 billion was saved for the public between January 2017 and July 2019 as a result of the Public Procurement Authority (PPA) reviewing contracts before it for approval, either under sole-sourcing or restrictive tendering procedures.

On the Africa Continental Free Trade Area (AfCFTA) agreement, President Akufo-Addo assured the diplomatic community of Ghana’s resolve to ensure the smooth take-off of the secretariat and make sure it turned out to be a world-class institution that would be the pride and joy of all Africans.

“We in Africa are now members of the world’s largest free trade area since the formation of the World Trade Organisation (WTO) and we have the onerous responsibility of making sure that the AfCFTA becomes an effective tool for the rapid development of Africa and the systematic empowerment of its long-suffering people,” he stated.

In the pursuit of Ghana’s foreign policy of good neighbourliness, he said: “We continue to improve our cooperation and solidarity with all countries in West Africa and Africa.”

“That is why Ghana is working tirelessly with the government of Nigeria to resolve the conflict between the Ghana Union Traders Association (GUTA) and Nigerian traders operating in Ghana,” he said and hinted that he had been assured by the President of Nigeria that the issue of border closure between Nigeria and Benin, which had had an impact on Ghanaian traders, would soon be satisfactorily resolved.

“I am highly optimistic that that will be the case and that the reputation of our nation as a beacon of democracy will be further enhanced,” he emphasised.

President Akufo-Addo described the ‘Year of Return’ initiative as a remarkable success and said the new initiative, ‘Beyond the Return’, would help consolidate the development and help realise the vision of the Black world on both sides of the Atlantic which leveraged hard work, enterprise, creativity and innovation to engage in mutually beneficial trade and investment cooperation that would guarantee the prosperity and dignity of Black people the world over.

The Colombian Ambassador to Ghana and Dean of the Diplomatic Corps, Mrs Claudia Turbay Quintero, on behalf of her colleagues, lauded President Akufo-Addo’s vision of championing the campaign for human rights, peace and integration both in Ghana and on the African continent.

She also commended the President for the free SHS policy, the One-district, One-factory (1D1F) initiative, the Planting for Food and Jobs programme, as well as the expansion of the Tema and the Takoradi Industrial parks through public/private partnerships.

She was happy with the interest shown by the diplomatic community in Ghana’s development process and thanked the diplomats for their collaborative effort towards sustaining the country’s development, as well as their engagement with the Foreign Ministry in operationalising its work programme.