Are Members of the Armed Forces Scuttling A $350m Project on the Teshie Beach Stretch? 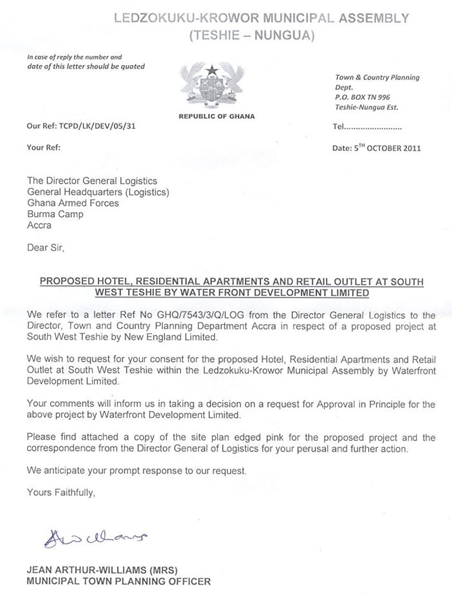 The presence of members of the Armed Forces scares contractors away.

Real Estate developer, Waterfront Development Ltd, has opened up about the activities of some members of the Ghana Armed Forces (GAF), said to be preventing the start of a $350 million project along one of Accra’s vast oceanfronts. The developer believes some high-ranking military persons are deliberately scuttling the project due to their parochial interests. Waterfront Development Ltd has said on numerous occasions that members of the Armed Forces and some persons it suspects to be a gang of land guards parading under the name “Laboma” threaten its contractors who come to the site to secure and break ground for the project to start.

“We have engaged the police, but you see in matters involving the military even the police do not want to take them up. So we have gone to court to seek an injunction against these people who have illegally and criminally encroached on our land and continue to threaten our contractors,” said Kwabena Amakye, Spokesperson for Waterfront Development Ltd.

In an explainer, Waterfront Development Ltd said "The Accra Waterfront” project, a 19-acre planned development project, was scheduled to start in 2015 after acquiring all relevant licenses and building permits but has for the past four years been unable to develop the land, as a result, the activities of members of the military and criminal gangs who have used violence to intimidate, kidnap and assault our constructions workers.

- Waterfront Development Ltd said the activities of members of the Armed Forces are delaying the project.

When Myjoyonline.com reached out to the GAF for a reaction, Public Relations Officer, Col. Eric Aggrey-Quarshie, said although he cannot appropriately visualize the site, he is aware that the Laboma area is close to the military shooting range.

“Whichever document that they [developer] have they should bring it to the Director of Lands [at the GAF] because he will see which land is closer to our facility,” he urged the estate developer.

“People have tried developing those areas and they have been stopped because it is close to the shooting range…We will not wait for somebody to be knocked down by a bullet and the same media will come and say we have been [negligent],” he added.

But the spokesperson for Waterfront Development explains that this excuse is merely a sham.

“For the Military to say that they don’t know what’s happening on the land is not true.  Immediately our workers and contractors go on the land even with police protection the Military will show up within ten minutes to stop us meanwhile they have encouraged the thugs illegally on the land to build all kinds of things. Anyone in this Accra can see the truth but the Military is issuing a statement saying they don’t know.”

“Waterfront has its building permits and that process involved notification of the Military, so they cannot say they don’t know of Waterfront and our ownership of the land.  We bought this land in 2010. The Military even wrote to the company that we bought the land from New England approving the mixed-use development. Here is a copy of the letter.  Some people instead of doing what is right are busy supporting illegalities for whatever personal agendas.  This behaviour is wrong and is costing us all a lot.  I know many Ghanaians who would have been employed in good jobs if they had not been disturbing us.” Amakye added.

Eunas Eshun, a lawyer at Minkah Premo, which represents Waterfront responded to Col. Aggrey-Quarshie comments thus: “The Ghana Armed Forces has no right to go on our clients’ private property and interfere with their legal activity.  If they believe Waterfront is breaking the law in any way, they should report it to the police.  Ghana is a democracy and the military has to understand that they are not above the law.  The laws of the Republic of Ghana apply to them.”

Waterfront Development Ltd has vowed to exhaust the legal system in a bid to secure an injunction against the activities of these people.

The estate developer cites an injunction granted by the high court last year against organisers of Afro Nation festival in addition to land ownership documents as proof that they are the rightful owners of the said adjourning pieces of land.

The parcel of land where the project will be erected is located on the southern side of the Teshie-Labadi coastal road situated at Teshie Lenshie Quarter.

Meanwhile, the multimillion-dollar project is expected to be developed over eight years with the first phase planned to be completed in 24 months.  “The project is expected to have a significant positive economic impact on the economy of Accra and Ghana, and will generate over 15,000 construction and permanent jobs for Ghanaians”, the developer said.