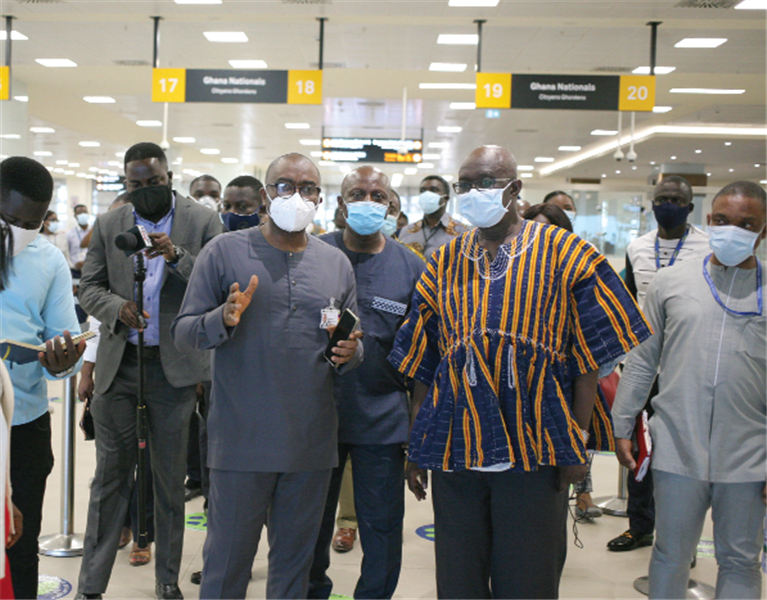 The Ministry of Aviation and its agencies are putting in place robust measures to ensure the safe reopening of the Kotoka International Airport (KIA) to international passenger traffic by Tuesday, September 1, this year.

The preparations include the installation of seven temperature thermal scanners and 70 sample-taking booths, floor markings to ensure social distancing, counselling units and standby ambulances at Terminal Three of the airport.

The protocols put in place are to ensure adequate physical distancing, the wearing of nose masks or coverings, enhanced sanitation and disinfection, health screening, contact tracing and the use of passenger health declaration forms.

The measures are in compliance with the International Civil Aviation Organisation’s (ICAO’s) Take-Off guidance for safe operations amid the coronavirus disease (COVID-19) pandemic.

An announcement on the reopening of the airport for international passenger traffic will be based on the successful testing of and simulation on the COVID-19 preventive installations tomorrow.

The International Air Transport Association (IATA) announced that, as of August 24, Rwanda and Kenya were the only African states in 100 per cent alignment with the ICAO Council’s Aviation Recovery Task Force (CART) recommendations.

Other African states, such as Ghana and Togo, were more than 90 per cent compliant, while The Gambia was about 81 per cent ready.

This came to light yesterday when the Minister of Aviation, Mr Joseph Kofi Adda; the Chief Director of the Ministry of Aviation, Ms Christina Edmund; the Managing Director (MD) of the Ghana Airports Company Limited (GACL), Mr Yaw Kwakwa, and some officials of the Aviation Ministry, Airport Health Directorate and other agencies at the airport inspected health surveillance facilities at the airport which are germane to Ghana’s attempt to open up its airport and airspace to international travel.

President Nana Addo Dankwa Akufo-Addo, during his 15th update on COVID-19 efforts, dropped the hint that the airport could be opened on September 1, this year, and this has triggered preparations towards the opening.

Under his instructions, the Ministry of Aviation, the GCAA and the GACL were to work with the Ministry of Health and its agencies to ascertain the country's readiness to reopen the airport.

Speaking to the media after the inspection, Mr Adda expressed satisfaction with the measures, saying: "As you can see, there is some serious work ongoing at the airport with the creation of 70 sampling booths and a testing department where the blood samples will be sent, tested and the report electronically sent.”

Although the airport was not 100 per cent ready as of the time of the visit, Mr Adda expressed the hope that the work would be completed today.

The President would address the nation on Sunday and announce the way forward, depending on the outcome of the final testing and simulation of the COVID-19 preventive installations at Terminal Three, the minister said.

According to him, the airport would be disinfected as soon as the testing and simulation of the COVID-19 preventive installations were completed.

When the entourage got to the lower section of the arrival hall, five temperature thermal scanners had been fully installed, with adequate physical distancing marks on floors.

There were also benches at the terminal, while inscriptions encouraging the wearing of face masks were posted all around the walls.

At the upper level of the arrival hall there were construction works to fit cubicles, cashier counters, sampling booths and testing laboratories.

The minister expressed the optimism that the airport would be ready for opening by close of day tomorrow.

Mr Kwakwa said the new installations would ensure that passengers were tested for the disease and given the results within 15 minutes.

He said all the arrangements had been done with huge passenger numbers in mind to prevent congestion during peak hours.

Although the testing capacity was not disclosed, the officials said they would stagger airline arrival to reduce congestion and testing backlogs.

Mr Kwakwa said the floor of both the arrival and the departure halls of Terminal Three had been marked, while hand sanitiser had been installed at vantage points for use in observance of the COVID-19 protocols.

He said the airport authorities had put adequate measures in place to ensure that the directive on the wearing of nose masks would be fully enforced.

He added that the systems at the terminal had been configured to allow for enhanced ventilation to curtail the concentration of any pathogens in the halls.