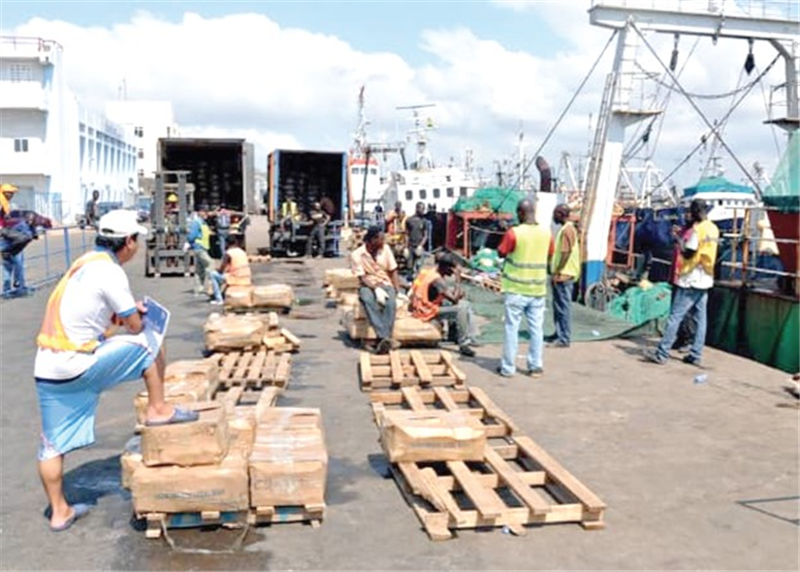 Research in the country’s marine resources claims that nine out of every 10 fishing trawlers operating in the country are beneficially owned by Chinese corporations.

According to findings of the study, the foreign owners usually operated through local front companies using opaque corporate structures to import their vessels, which they registered and with which they obtained licences to fish.

It also estimated that Ghana was currently losing between $14.4 million and $23.7 million annually in the trawl sector due to low licence fees, as well as the lack of enforcement of revenue for fisheries-related infringements.

However, the agency responsible for regulating the sector, the Fisheries Commission, has disputed the findings of the study conducted by a UK-based non-governmental organisation, the Environmental Justice Foundation (EJF).

The commission described as “unfortunate” suggestions claiming that an estimated 90 per cent of trawlers operating in the country were beneficially owned by Chinese corporations.

The EJF, which supports countries in sustainable fishing and marine activities, presented the findings of the study in Accra at a roundtable.

It was attended by key players in the industry, including representatives of the Ghana National Canoe Fishermen Council, the Ghana Industrial Trawlers Association (GITA), the National Fisheries Association of Ghana, the Economic and Organised Crimes Office (EOCO) and Transparency International.

The report is titled: “At what cost? How Ghana is losing out in fishing arrangements with China’s distant water fleet”.

The research was conducted with the support of a local NGO, Hen Mpoano, and other collaborators.

The Fisheries Programmes Manager of the EJF, Mr Socrates Segbor, who presented the findings, said the study identified eight Chinese companies that had beneficially owned industrial trawlers operating under the Ghana flag.

The eight accounted for 75 per cent of the trawlers that were licensed to fish in the country as of the end of 2019.

It also identified two companies that were found to be particularly dominant in the sector, accounting for 44 per cent of licensed vessels as of the end of 2019, each with a fleet of about 20 bottom trawlers operating under the Ghana flag.

He added that at least seven Chinese fishing companies with trawl operations in the country had obtained ocean fishery enterprise qualification licences from the Chinese government, which conferred eligibility to receive state subsidies.

Mr Segbor said for purposes of licensing, trawl vessels in the country were registered to numerous local companies, pointing out that “52 Ghanaian companies have held licences for trawl vessels since 2015”.

The findings, according to Mr Segbor, further indicated that Ghana was substantially under-valuing its fishery resources in arrangements with Chinese fishing companies to license vessels under the Ghana flag.

The Executive Director of the Fisheries Commission, Mr Michael Arthur-Dadzie, however, disagreed, saying there were no foreign vessels fishing in the country’s waters.

He said “licensing is not owned by foreigners” and, therefore, one could not say vessels fishing in the country’s waters were foreign vessels.

He said many Ghanaians did not have the means to buy vessels outright and, therefore, had to go into hire purchase agreement with some foreigners to bring in the vessels.

Mr Arthur-Dadzie, therefore, said Ghanaians entering into agreements with some foreigners to buy vessels to fish in the country’s waters could not be described as “foreign vessels fishing in Ghana’s waters”.

“Under the trawl sector, Ghanaians are the holders of the licences. It will be unfortunate to say foreign vessels are in Ghana’s waters,” he added.

The Office Manager of GITA, Mr Gilbert Sam, also said those who conducted the research failed to consult key stakeholders in the sector for better clarification on some of its findings before publishing them.