Zero progress made in corruption fight within past year- Transparency International 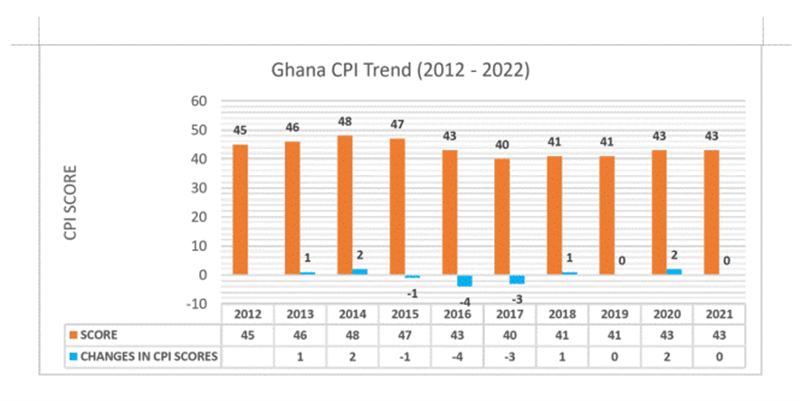 The country scored 43 out of a possible 100 on corruption in 2021, same as the previous year, according to the latest Corruption Perceptions Index (CPI) report by Transparency International.

The report ranked the country 73 out of 180 countries/territories included in the 2021 index – noting Ghana had failed to make progress in the fight against corruption in the year 2021, as the score of 43 is the same as the 2020 score.

The country’s current performance is still below the expected average of 50 and thus leaves much to be desired, the anti-graft body said.

A trend analysis of Ghana’s CPI scores over the past decade shows a decline of 2 points. This is despite several promises by the Nana Akufo-Addo-led government to protect the public purse using the Office of the Special Prosecutor and other state agencies. It however appears such promises remain mere rhetoric, based on the country’s performance on the CPI over the past five years.

Following the country’s stagnated performance, the report made recommendations that would improve the score. These include enhanced institutional checks on power, and empowering citizens to hold those in power to account.

“Public oversight bodies including anti-corruption agencies and the supreme audit institution must operate fully independently from the executive as their mandates stipulate.  They should be continuously well-resourced with budgets allocated to them fully disbursed, and empowered to effectively investigate and sanction corruption timeously,” it said.

Other recommendations include punishing the corrupt to serve as a deterrent, and improving transparency and accountability in political party and campaign financing; particularly ensuring that the Electoral Commission enforces the Political Parties Act, 2000 (Act 574), Section 21 – which relates to the disclosure of funding sources by political parties.

In addition, it wants Parliament to amend Act 574 to include disclosure on funding sources for candidates contesting Presidential and Parliamentary elections.

SSA’s average of 33 remains the lowest in the world, with 44 countries including Ghana ranked below 50.

The CPI global average remains unchanged at 43 for the tenth year in a row, with two-thirds of countries scoring below 50.

Top countries on the Index are Denmark (88), Finland (88) and New Zealand (88) – all of which also rank among the top 10 percent in the world on the Democracy Index Civil Liberties score.

In the last decade, 154 countries have either declined or made no significant progress.

“Since 2012, 23 countries have significantly declined on the CPI – including advanced economies such as Australia (73), Canada (74) and the United States (67); the latter dropping out of the top 25 countries on the Index for the first time,” the Index added.

Furthermore, 25 countries have significantly improved their scores, including Estonia (74), Seychelles (70) and Armenia (49).