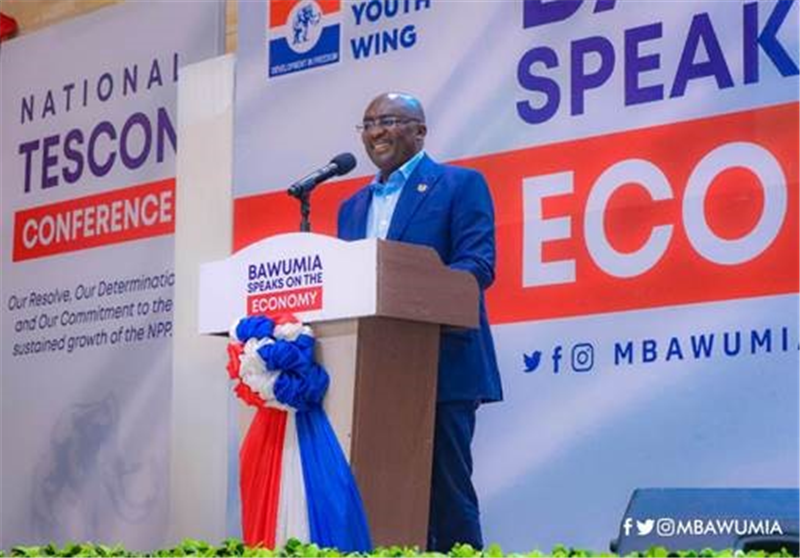 The Vice-President, Dr Mahamudu Bawumia, has assured Ghanaians that the government is building a new economy that is hinged on strong and resilient fundamentals.

“We are building a new economy under the leadership of President Nana Addo Dankwa Akufo-Addo,” he declared in a two-hour lecture delivered at the closing of the National TESCON Training and Orientation Conference at the Pentecost Convention Centre at Gomoa Fetteh in the Central Region on April 7.

Speaking on the state of the economy, the Vice-President stated: “We must celebrate our achievements, big or small, and not to tarnish or belittle them for the sake of politics.”

“I look forward to all of you playing a role in making our nation great and strong. We are on the right path. With sound policy, and by the Grace of God, we are bouncing back better and stronger,” he stated.

The TESCON is the youth and student wing of the New Patriotic Party (NPP).

The two-day event was attended by the First Lady, Rebecca Akufo-Addo; wife of the Vice-President, Samira Bawumia; the Chairman of the NPP, Freddy Wosemawu Blay; the General Secretary, John Boadu; Ministers of State, NPP Members of Parliament and other national, regional and constituency executives.

Before he began to speak, he had to hold on for three minutes, as the members of TESCON besieged the frontage of the podium, amid singing and chanting Black Sherrif’s song “Kweku Frimpong”, which was acknowledged with waves by the Vice-President.

Dr Bawumia said issues about national economies and how well individual countries were handling their respective economic situations appeared to be the most important thing on people’s minds in recent times, and that from the man on the street to the business mogul, the food we ate, the clothes we wore, the shelter we sought or had, to the benevolence we extended to friends and family, the health of the economy was the cardinal instrument.

On inflation, he said the pandemic, which started early 2020, resulted in the greatest economic depression since the 1930s, with most countries recording negative growth.

Supply chain disruptions and the rising price of oil, he indicated, had resulted in major increases in the prices of fuel across the globe, with petrol prices doubling in many countries.

“The global increase in fuel prices is causing hardships in even the most advanced economies such as the United States of America (USA).

That, he said, had dramatically increased the cost of shipping goods and, therefore, their prices on the market.

On the prices of food, the Vice-President said the Food and Agriculture Organisation (FAO) Global Food Price Index increased from 95.1 at the end of 2019 to 140.7 in February 2022 (an increase of 48 per cent), adding that the increase in commodity prices had been exacerbated by the Russia-Ukraine conflict.

Citing the Ghanaian example, he said “30 per cent of our cereal grains, wheat flour and fertiliser is from Russia, 60 per cent of iron rods and metal sheets imports is from Ukraine, while 20 per cent of Ghana’s manganese exports is to Ukraine”.

He said global inflation was on the rise and many advanced economies, such as that of the United Kingdom (UK) and the USA, were experiencing their highest inflation rates in 30 and 40 years, respectively.

He pointed out that countries such as Algeria and Nigeria were all feeling the impact of price increases.

Similarly, he said, inflation was accelerating at 1.3 to two times its rate before COVID-19 in Ghana and Nigeria.